Black spot is a prevalent rose disease that is caused by the fungus Diplocarpon Rosae. Should your rose bushes develop the telltale signs of black spot, remedial measures must be taken immediately. Otherwise, the bush will begin producing fewer blooms and the rose's ability to survive the winter months will be jeopardized. 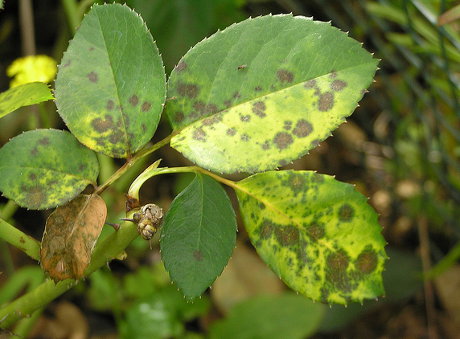 Black spot on roses is easy to recognize in its latter stages, but might not be noticeable in the beginning. In fact, by the time black spot starts showing signs, as few as 3 to as many as 10 days have already passed since the fungus first germinated.

The first visible symptom is black-colored spots on the leaves. As the disease progresses, a yellow ring forms around the black spots and the spots spread through to the underside of the leaves. Spore-producing spots will be visible upon close examination. The black spots will continue to grow and soon the entire leaf may turn yellow. Many of the yellowed leaves will begin falling off the bush.

Black spot is a fungus and as such, it spreads. It'll easily jump from one bush to another for as long as it's left untreated. The fungus can survive on the fallen leaves through the winter, and also on the cane where it has been infected so rose growers cannot rely on the harsher weather to kill it.

Like most fungi, black spot thrives in warm, moist environments. Spores will germinate after 7 hours of being wet and when the ambient temperature is between 65 F (18 C) and 75 F (24 C). The warmer the weather, the quicker the disease spreads.

Proper care of your roses is the only way to prevent this disease from developing or spreading. Since spores can survive on fallen leaves, it's crucial during the fall season to rake up and remove all dead leaves from the ground and cut away any infected canes.

In the spring, when roses are still dormant, head to the nursery and purchase wettable sulphur and a soap containing fungicide and then spray all rose bushes thoroughly with both. The spores cannot adhere to the sulphur, so the leaves are protected whenever they're covered. Because the sulphur will wash off in rain it's important to reapply whenever necessary.

The fungus needs a wet environment for germination, so take extra care to keep the leaves moisture-free. For example, plant roses in sunny locations as opposed to shady places so that the morning dew evaporates more quickly. Use sprinkler hoses when watering so that only the roots get watered and not the leaves. Water early in the day, so there's plenty of time for water to evaporate. Prune the roses regularly so that air can flow freely among the leaves and be sure to allow plenty of space between bushes for the same reason.

When roses exhibit symptoms, first cut away affected parts and throw clippings in the trash, NOT the compost pile (remember the fungus on leaves won't die). Then spray all the leaves with sulphur.