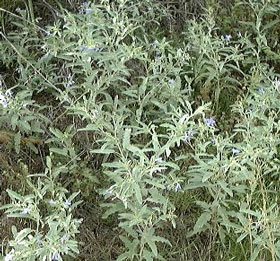 Has anyone found a suitable herbacide for this silver leaf nightshade?

I have tried glyphosphate with a surfactant but with little results. I have heard of a product called percloran(?) but don't know if it's effective or if I have the correct name.

So far I've been removing this stuff by hand, but it keeps coming back.

A few of my sheep have become very ill after eating these weeds, and it has cost me a bundle in veterinary costs.

Does anybody have any advice on getting rid of this type of nightshade?